Now is the golden age of stadium-anchored mixed-use development — or at least sports stadiums as important components of urban mixed-use developments. A proposed stadium project surrounded by a sea of parking, so common in the late 20th century, would probably be a nonstarter these days.

According to experienced stadium designers, there is no single formula for putting together a mixed-use project with a stadium component. Urban settings vary too much from place to place, and so does the configuration of the stadium, depending on the sport played there and other uses.

Even so, as developers and designers are busy trying to get mixed-use right in each setting, patterns are emerging. 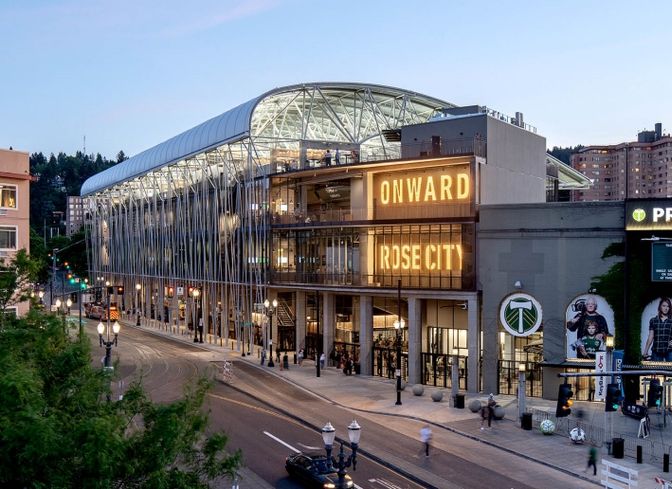 For one thing, the stadiums themselves are being made as experiential as possible, above and beyond the entertainment provided by the game.

Also, stadium exteriors aren't being designed to come across as separate from their surroundings, and the other development in conjunction with the stadiums is far more sophisticated than tacking on a few nearby bars and restaurants. Entire communities are being invented or at least upgraded with a live-work-play spectrum of properties.

The payoff promises to be big: more revenue for teams not only from increased attendance, but also from their share of the development. "If you look at venues going forward, they're going to anchor mixed-use developments, especially but not only baseball stadiums," Populous Design Director and principal Byron Chambers said.

Chambers, in the firm's Dallas office, has designed a wide variety of stadiums, including Major and Minor League ballparks, NFL stadiums and collegiate facilities.

The real estate industry is responding to the integration of sports into the fabric of mixed-use districts. Earlier this year, Chicago-based Cushman & Wakefield established a Sports & Entertainment Advisory Group to facilitate the design, building and operations of athletic and entertainment venues as parts of a whole, rather than isolated entities.

“The sports and entertainment industry is changing rapidly, and the traditional revenue model has evolved and expanded,” Cushman & Wakefield Executive Managing Director Craig Cassell said. “As a result, there's a tremendous opportunity to serve the sector.”

Cassell, along with Executive Managing Director Michael Sessa, is leading the group.

"Within the last couple of years, we identified this as an opportunity to grow within this vertical market of sports and entertainment," JLL Senior Vice President Megan Pawlowski told Bisnow.

"The stadium experience has to be incredible, but more than that, it has to connect to the surrounding area," Chambers said.

This is being done at the oldest and newest ballparks. Wrigley Field in Chicago is an example of a venerable old ballpark undertaking new development to enhance its neighborhood — in recent years there has been a slew of new office, retail, entertainment and hotel space built in the vicinity of the storied early 20th-century stadium.

A new stadium that in some ways is setting the tone for integration into its neighborhood is the facility for the Atlanta Braves, Chambers said. SunTrust Park opened in 2017 in Cobb County as the home of the Atlanta Braves with a mixed-use community called The Battery at SunTrust Park developed simultaneously that includes retail, entertainment, office and residential space.

"The spaces in between the stadium and the surrounding urban fabric are key," Chambers said. "They have to allow people to work and play in the same area."

The connections between the stadiums and their surroundings are taking a number of forms. At SunTrust Park and The Battery at SunTrust Park, that connection includes one-network wireless infrastructure that provides 200 gigabytes of bandwidth, and more than 800 hot spots to facilitate fans' upload of streaming video and photos to social media.

The connection can also be thematic. The NFL's Detroit Lions' home stadium, Ford Field, was renovated in 2017 with lighting, materials and other details inspired by the surrounding neighborhood and urban setting, according to Rossetti, which did the original design as well as the renovation. Detroit’s history inspired the southern side of the project, while the auto industry and midcentury design influenced the northern side.

Or the connection can be physical, as was implemented with the expansion at the MLS Timbers' historic home of Providence Park, in Portland, Oregon's Goose Hollow neighborhood. Designed in 1925 but only partially completed, the stadium had direct visual access from the street on its more public, eastern edge. Allied Works Architecture recently designed an expansion of that part of the stadium and focused on opening it up to the neighborhood.

"Where the original concrete and timber structure is heavy and inwardly focused, the expansion engages the city. The arcade over the public sidewalk gives the feeling of being inside the stadium and connected to the energy of the game."

"It's a civic platform, revealing the life of the game both on the field and in the stands, inviting at street level and alive on the floors above,” he said. 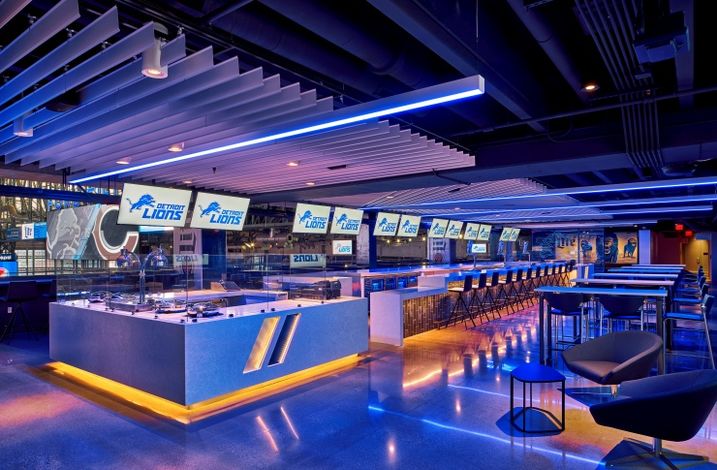 The latest stadium developments are aiming to be as experiential as possible. That was a driving consideration for Detroit's Ford Field.

Rossetti's Kirk Phillips, the project’s design lead, said the recent renovation strengthens the viability of Ford Field in the context of the entertainment district that surrounds it.

"The renovation provides new amenities that enhance the vibrancy of the district, providing a platform for top-tier national and international acts to perform in the core of a major urban city," he said. "The flexibility and scalability of hospitality options opens opportunities for Ford Field to host mega-events, such as championship games and drafts, as well as a variety of regional, non-sports events."

LA Rams Chief Operating Officer Kevin Demoff said during a Bisnow event that the Rams' stadium and nearby mixed-use developments will be a place where fans can cheer LA's two NFL teams — the Rams and the Chargers — but it will also be a major sports tourist destination.

Though it is still under construction, the stadium has been tapped to host the 2028 Los Angeles Olympic Games' opening and closing ceremonies, and was awarded host duties for the Super Bowl in 2022 and college football national championship in 2023.

For the Orlando Magic's new development, the experiential parts are so important that the team created a tourism department, one of the only NBA clubs with a marketing team charged with marketing to tourists, especially from outside the U.S., including potential attendees from Europe, Brazil and the Middle East.

In Boston, The Hub on Causeway is being developed near the new TD Garden Arena, home to the NHL's Bruins and the NBA's Celtics. The 2M SF mixed-use project will include multifamily, office, hotel and a 15-screen ArcLights Cinema with extra-wide seats and a full café and bar.

In Atlanta, though Battery at SunTrust Park has been open for two years, its experiential offerings are still being improved upon. This year the Battery added Burn by Rocky Patel, a cigar lounge; a vinyl records store called Waterloo Sunset Records; and a boxing gym, the Nashville-established Pepper Boxing.

It all meshes together into a dense urban experience that will draw people whether they are attending a game or not.

"What goes on in the stadium has to complement its surroundings," Chambers said. "It's part of the trend toward urbanization in this country, which isn't going to change."