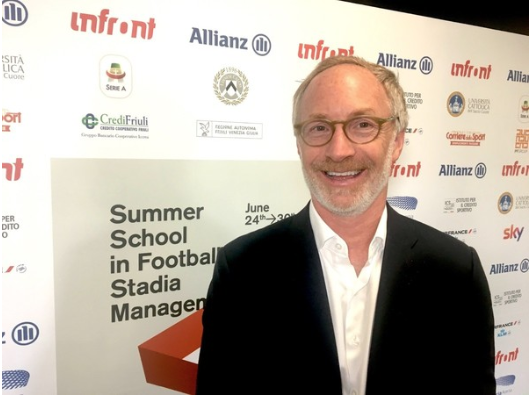 A common thread that looks to the future links Detroit to Udine at the Summer School in Stadia Management organized by Udinese Calcio,  ICRIM-Universita Cattolica, and the American architect Matt Rossetti, a point of reference in the world panorama of innovation of sports facilities, designer of the new stadium in Venice, and author of architectural works for sports and entertainment such as the Palace Auburn Hills in Detroit and the Red Bull Arena in New York.

“Mr. Rossetti, this Summer School in Stadia Management and hosted at the Dacia Arena, one of the few modern stadia in Italy, what do you think?”

I was struck by the quality of the installation, what was done at the Dacia Arena and the perfect combination of innovation and tradition: the historic arch of the grandstand was kept, a tribute to the history of this place, but something was built around it new and modern. In Udine they took a risk by taking a road that in Italy should have been taken 10 or 15 years ago, as happened in the rest of Europe.

“Innovation against tradition, is the debate on the San Siro.”

"If the historical elements cannot marry in any way with the modern concepts of hospitality then maintaining them is a wrong decision. Sometimes you are forced to remove the emotion from the reasoning, you have to go on because the new structures can be so fantastic that they justify this change.”

They will provide great hospitality, be addressed to families, and offer a comfortable experience in all sectors, from design to corporate hospitality. This is what they did in England with enormous success; hooligans almost disappeared. When you have degraded, poorly cared for environments, people feel free not to respect them, it's an established concept. For this reason the stadiums must be interpreted as places of hospitality, improved with a "refresh" every three years and with significant renewals every ten, it is a process in continuous evolution. We also need a design that allows and facilitates people to move, to experience different moments and contexts inside the stadium, in spaces where they can stand or relax, eat or chat while the game is in progress. Spaces and businesses open 365 days a year are also fundamental, so that the stadium becomes a point of reference not only for the fans but for the entire community to which it belongs.

“In 2026 the Olympics will arrive; will they also bring innovation to the infrastructure?”

The allocation of the Olympics to Italy must not give false enthusiasm on the infrastructure front. The Mayor of Milan's commentary on the San Siro is indicative because he fears that the new stadium will not be ready in time. There are seven years, in a normal context, two or three years would be enough for the design and two enough for the construction. In four / five years everything should be possible. It worries me that the bureaucracy cannot get out of the way. I hope that the Olympics will become a catalyst to allow Italy to fill the infrastructural delay that it has accumulated over the years. The time is ripe.